Many habitats of high conservation value have become scarce and fragmented over the centuries, leading to declines in the wildlife dependant upon them.

Reverting cultivated land to habitat can be hugely beneficial to wildlife, but as only small areas are likely to come out of food production, it is important to target sites that will deliver the most value for wildlife conservation.

Arable reversion involves reverting cultivated land to natural habitat. It offers an opportunity to extend and link up existing habitats of high conservation value. Habitats that can be created include wet grassland, heathland, chalk grassland, flower-rich meadow and potentially others, including woodland and scrub.

Arable reversion can deliver major benefits for wildlife, but is obviously a long-term commitment. Some habitats will take many years, even decades, to establish and achieve the desired outcomes.

Many habitats of high conservation value have become scarce and fragmented over the centuries, leading to declines in the wildlife dependant upon them. Reverting cultivated land to habitat can be hugely beneficial to wildlife, but as only small areas are likely to come out of food production, it is important to target sites that will deliver the most value for wildlife conservation.

It is important to carefully consider the most appropriate locations for reversion in order to maximize the benefits. Clear and appropriate objectives for a site are essential from the outset. Plan ahead for the required long-term management and seek specialist advice.

The most suitable areas for reversion will usually be land bordering or near existing habitat. Extending or linking up existing habitat will help to ensure associated plants and animals can easily colonise the new site. Appropriate management should also be at hand e.g. grazing, and the extra area can help spread costs.

Several factors will determine what habitats can be created, including soil type and topography. Many years of arable cultivation may have resulted in soil becoming unsuitable for the creation of some grassland types.

Plants associated with chalk grassland require dry, free-draining, thin soils over chalk. Ideally, soils will have a pH > 6.5 and a P index of 0 or 1.

For acid grassland and heathland, soil pH should be less than 5.5 and nutrients reduced to very low levels. Management to reduce fertility may be necessary. As fertility declines on acidic soil, an interesting acidic grassland sward should develop with low-input grazing. Heather can be introduced by harvesting seed from existing heathland. The objective should be a mosaic of heather, grassland, gorse and other scrub.

Reversion to wet grassland can provide habitat for a huge diversity of British wildlife. Breeding waders such as lapwings and snipe require moist soils that are rich in insects. The grassland does not have to be botanically rich to be good for birds: vegetation structure is as important as species composition.  It is helpful  to have a period of dry grassland management to establish a good soil structure and a deep-rooted sward before wetting up.  Going straight from arable to wet grassland tends to produce weak soils low in organic matter. Such soils have fewer earthworms and dry out earlier in the spring, shortening the period when soils can support grazing or machinery

Vegetation can be established through natural regeneration if suitable seeds are still viable in the soil seed bank, or where there is a good chance of seed dispersing naturally from adjacent habitats. It is the cheapest method of establishment, also guaranteeing the local provenance of the seed. However, results can be unpredictable.

With natural regeneration it is essential that weeds and rank vegetation are controlled through appropriate management i.e. timely grazing and/ or cutting. Distinction should be made between short-lived ruderal species, which will die out as the sward develops, and persistent problem species. Patches of thin vegetation should not be seen as failure – they help to create a diverse habitat which will support a wider range of wildlife

Sowing a seed mixture will sometimes be more appropriate. A rapid sward development will quickly stabilise soil and help minimise (but not necessarily avoid) weed infestation. Known heavy weed burdens are best minimised before sowing through repeated cultivation and/or spraying. The spreading of green un-wilted hay from a donor site onto cultivated ground is an alternative method of establishing grass seed of known provenance. 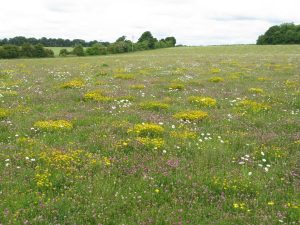 Author: Lynne Roberts:  The RSPB’s Manor Farm, Newton Tony, Wiltshire Aims and setting Chalk grassland is one of the richest landscapes for wildlife in the UK and is a habitat which has suffered significant losses in past decades. This case study focuses on Manor Farm in Wiltshire, now the operational base of RSPB’s Winterbourne Downs… 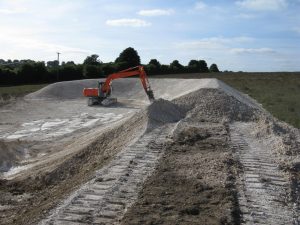 Author: Lynne Roberts . Farm: The RSPB’s Manor Farm, Newton Tony, Wiltshire Aims and setting: Manor Farm is a 296 ha working farm strategically placed between two of the largest tracts of semi-natural chalk grassland in the British Isles – Salisbury Plain and Porton Down. The RSPB purchased Manor farm in 2006 and have been… 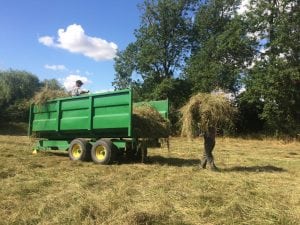 Author: Jennifer Palmer Farm: High Burnham Farm, Epworth Aims High Burnham is a large (+300ha) arable farm.  As part of the RSPB’s Axholme and Idle Farmland Bird Initiative¹ (Lincolnshire), an opportunity was identified to revert an arable field corner to a species-rich meadow.  The 1.7ha field corner sits within the base of a large L-shaped arable…