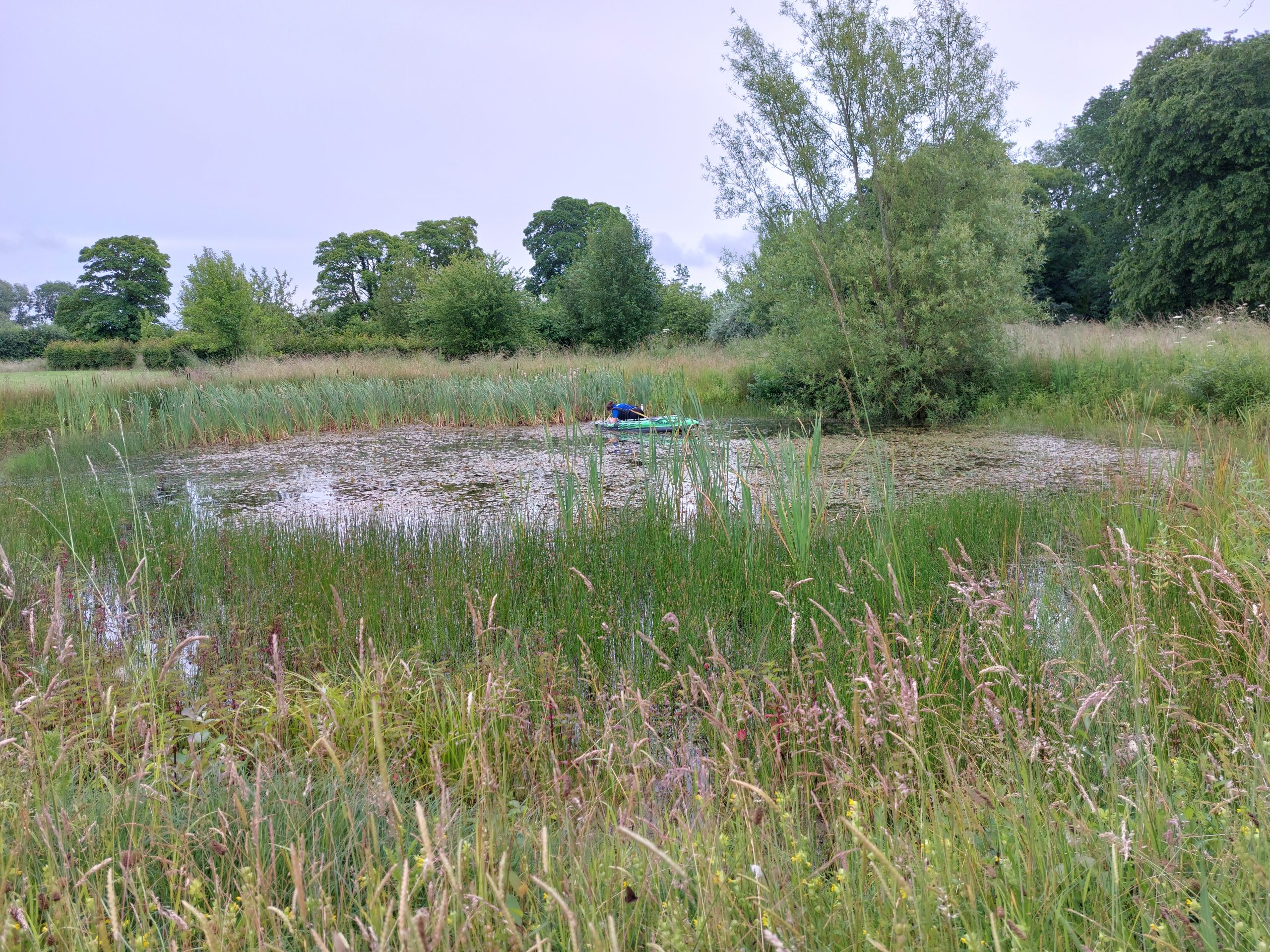 A 'ghost pond' is an old pond lost to in-filling. Here, drawing on the experiences of the Norfolk Ponds Project, the Pond Restoration Group at University College London (UCL) reveal how to locate, excavate and restore lost ponds in agricultural land. Restored 'ghost ponds' are quickly recolonised by aquatic plants and insects providing high-quality pond habitats for farm wildlife with minimal loss of good farmland.

The loss of farmland ponds

Prior to the 1940s, UK lowland farmland was pock-marked with ponds. While many ponds were dug beforehand, the 17th to 19th centuries saw a real age of clay digging, including calcareous clays that were spread over fields to improve the soil (marling) and various clay types that were used for brick making. In the same era ponds were also dug to water livestock and much evidence suggests that, once created, ponds in this era had all sorts of practical purposes. With agricultural intensification, especially during the 1950s-70s era, all was to change, however. A huge government-encouraged post-war push for increased food production saw miles of hedges pulled out and at the same time vast numbers of ponds were filled in, with hedges and hedge banks often bull-dozed into ponds to ease their eradication. Since the 1880s map-based estimates suggest that probably more than half a million ponds have been lost in England and Wales alone. In Norfolk, for example, pond losses of around 28% (8000+) have occurred since the early 1950s (Alderton et al. 2017), with this level of decline even higher in the pond-rich counties of Cheshire and Lancashire. Sadly, even today, ponds are all too often filled in to gain what is often a poor and wet piece of land that fails to produce a good crop. In truth we need to go in the other direction and start digging lost ponds out again – ghosts need to be resurrected.

The first step in ghost pond resurrection is to locate lost ponds on historic maps. In this respect 1st edition Ordnance Survey maps (of the 1880s) are particularly useful as are earlier tithe (1840s-50s) and estate maps. Ghost ponds can usually be easily located by overlaying these older maps with modern mapping. Further, there is also much to be gained from looking at aerial photographs and by talking to local people, especially older farm workers who may have been actively involved with ponds being in-filled.

After locating a ghost pond on the map, a field visit should be conducted to confirm its exact location on the ground. Ghost ponds commonly remain visible as damp depressions, puddles and darker soil patches out in the fields during winter, or as crop marks due to differing soil moisture content in spring and summer. Some ghost ponds, however, may only be indicated by a barely evident topographic low. In cases where there is little or no visible ground evidence for a ghost pond, but where a pond is clearly marked on historic maps, topographical data available from Lidar surveys can be useful in detecting subtle changes in elevation, indicative of a lost pond. In all cases, it is important to recognise that there may be a slight mismatch between surface topography and a mapped pond location due to inaccuracies in historic mapping or changes in the land surface (especially due to ploughing) since pond burial.

Once ghost ponds have been located excavation can begin. Ghost ponds should ideally be resurrected post-harvest or during fallow field years in late summer to early winter. At this time of year the water table is low, affording suitable conditions for working with heavy machinery and for inspecting different sediment layers during the early stages of excavation.

In excavating a ghost pond, it is important to stay faithful to its history and hence, as far as possible, excavate the pond to its original dimensions. A 14-tonne 360-degree digger is highly suitable for this work, but other kit can sometimes do the job. It is important to have an experienced digger driver working with one other person (ideally with expertise) who can examine the sediment layers during the digging process and hence guide the excavation. The first stage in a ghost pond excavation is to establish the depth and extent of the historic pond sediment layer to help approximate former pond shape and size. This can be achieved by digging a test trench through the suspected centre of the ghost pond (based on map demarcation and field measurements) until the historic pond sediment layer is reached. Subsequently, excavation of a second trench, located at right angles to the first (forming a cross), is essential to help gain a full knowledge of a pond’s former dimensions. Trial and error may be needed in this part of the process. Buried pond sediments typically take the form of a fine (when rubbed between your fingers) and dark silt, relatively easily distinguished from the often lighter, coarser, and stone and debris-filled sediment that overlies it. This pond sediment may also sometimes contain visible layered remains of water plants, pond-side trees and bushes as well as aquatic invertebrates such as molluscs. The historic sediment layer, and its associated seeds, is an important source of plants to resurrected ponds and it is important that much of this remains within the old pond basin.

Working outwards from the test trench(es) with the digger, the pond should be excavated following the contours of the historic sediment profile, so that the resurrected pond, as far as possible, matches the original pond. In this respect the shape and dimensions of the pond, as shown in old mapping, is also useful. Care should be taken not to remove too much of the past pond sediment at once (in case it is a thin later) by excavating a shallow layer of topsoil at a time. It is important to dig a good way through the old pond sediments (once found), however, and any of the pond sediment that is dug out should be put to one side and later spread onto the sides of the pond, which will greatly aid wetland plant re-colonisation. Careful excavation also allows for the retrieval of potentially informative discarded objects often thrown into ponds before and during burial.

Old glass bottles, pottery, clay pipes, agricultural implements, drinks cans and even plastic food packaging can provide dateable evidence for the approximate time of burial of a pond and can inform on its long forgotten history. It is good to note down these finds no matter how inconsequential they may seem at the time. Given that in-filled ponds often resulted in wet patches in fields, many farmers subsequently installed field drains at these locations. It is important to break all of these drains so that soil water freely enters the re-excavated pond basin, but does not quickly drain away. Spoil can be spread thinly around the ponds (but avoid high ground or high banks around the pond) or at another location depending on local circumstances and opportunities.

Once a pond excavation is complete, a margin of at least 10 m width should be marked out around the pond as a buffer from farming activities and agro-chemical applications. Newly excavated ghost ponds can be left to fill naturally with rain and spring water through the winter, and importantly, both the pond and its margin should be left to colonise naturally. NEVER seed or plant up a restored pond as this risks the arrival of non-native species, and also, nature just does it better than we do; if left alone exceptionally rare plants of the old landscape may return. If a ghost pond is resurrected in grazing land it is important to fence it off for at least two years so that plants can freely colonise the bare ground. Never connect a ghost pond up to a ditch or field drainage system as this will pollute the resulting pond. 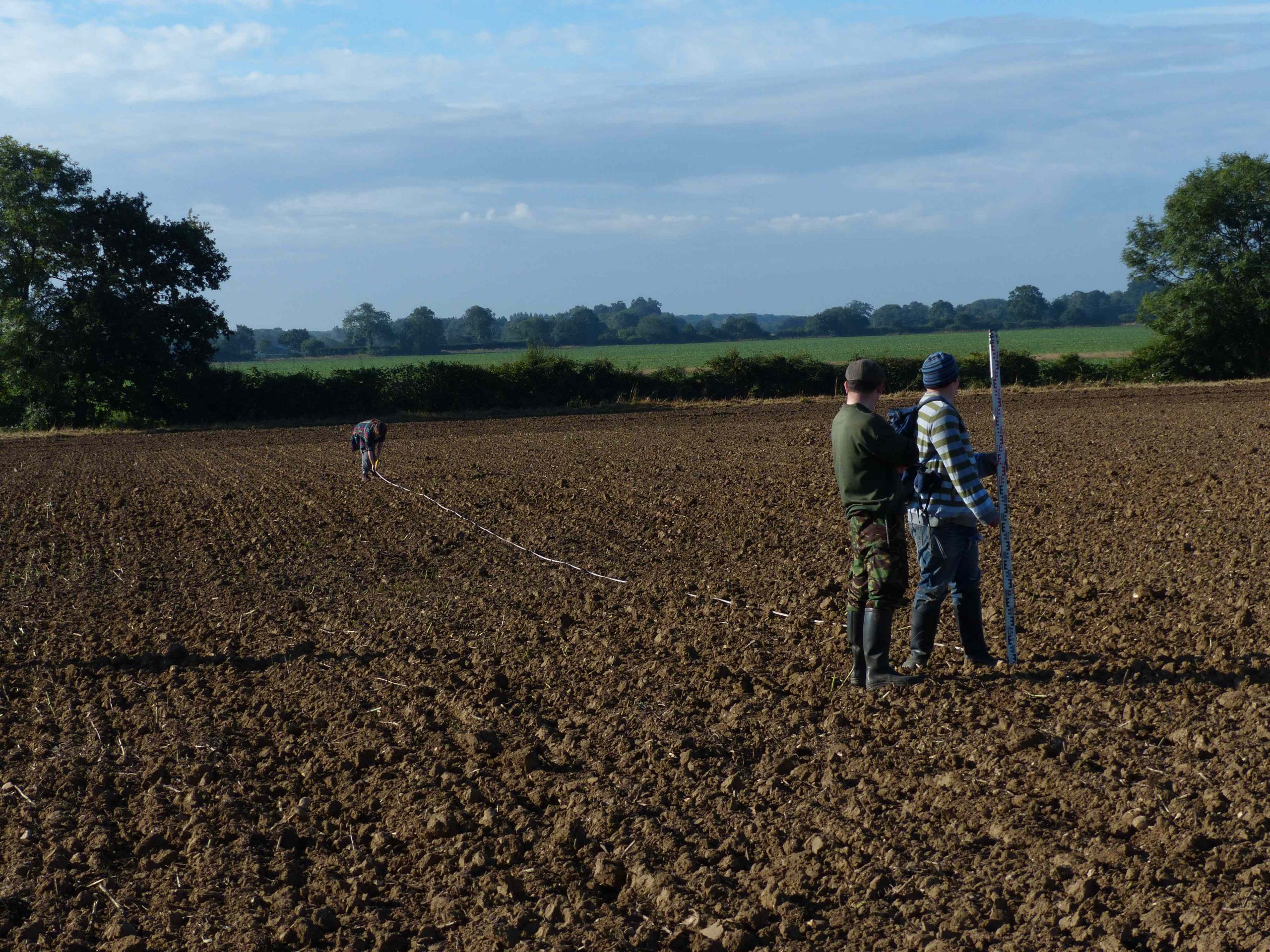 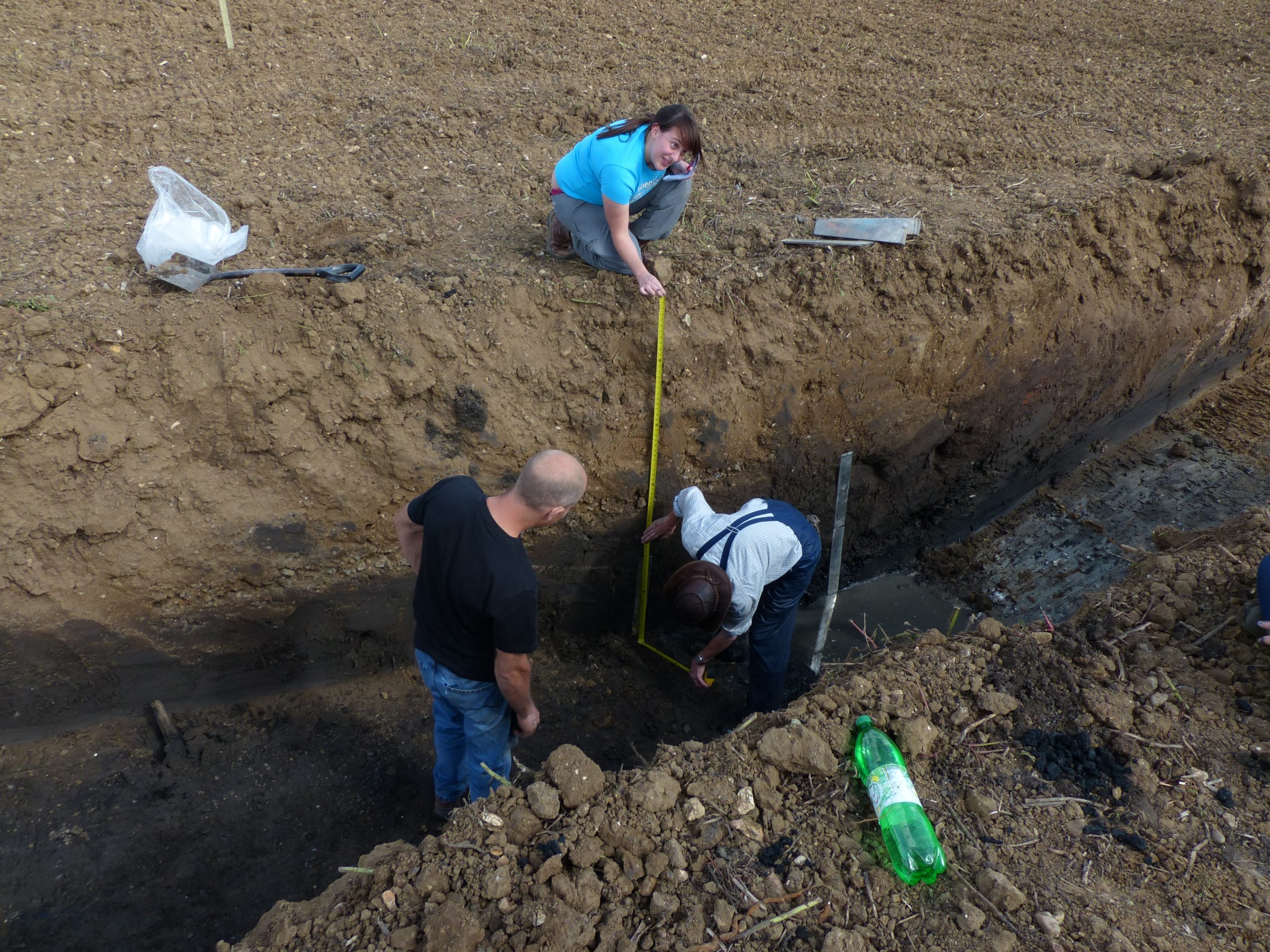 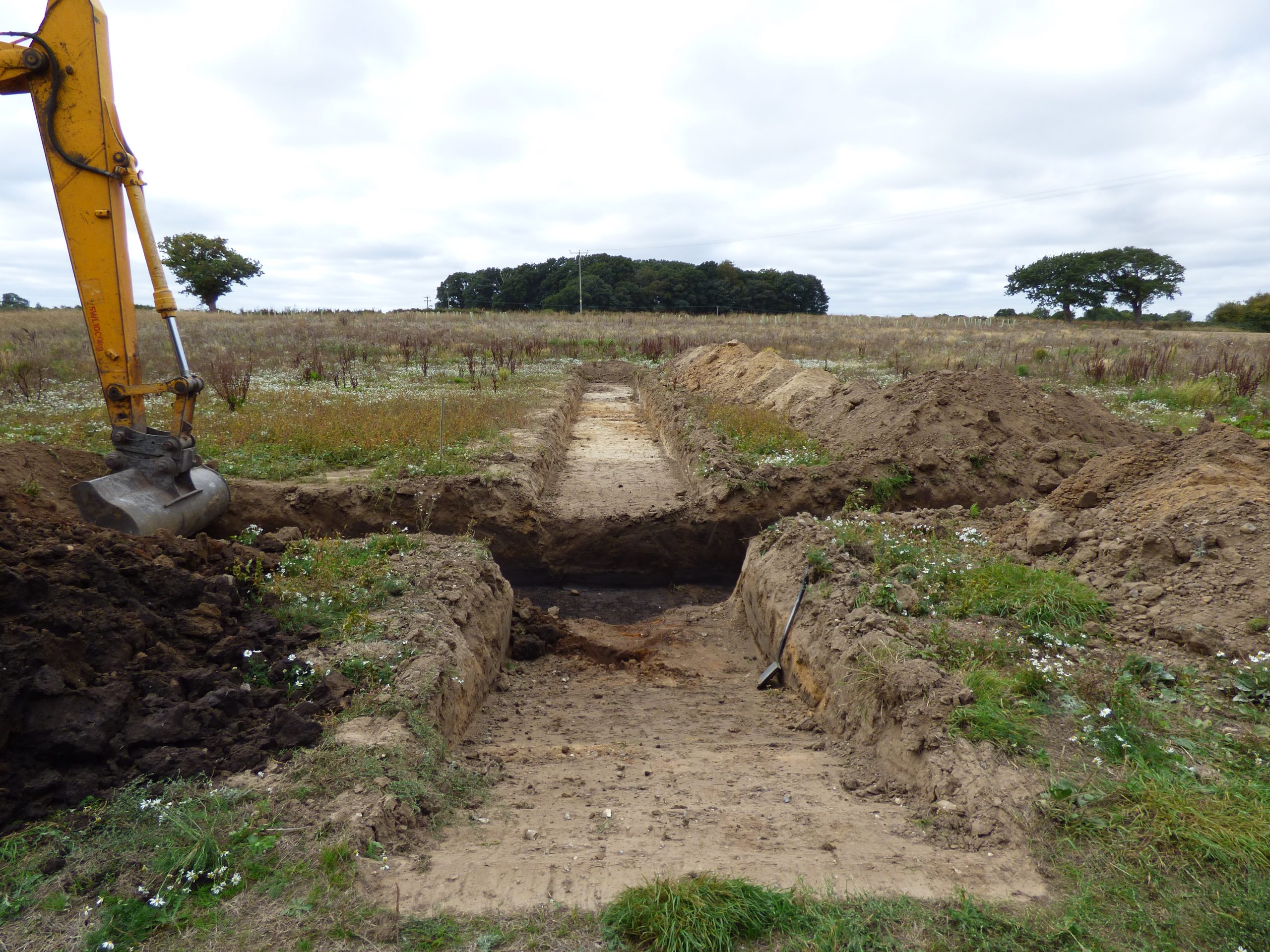 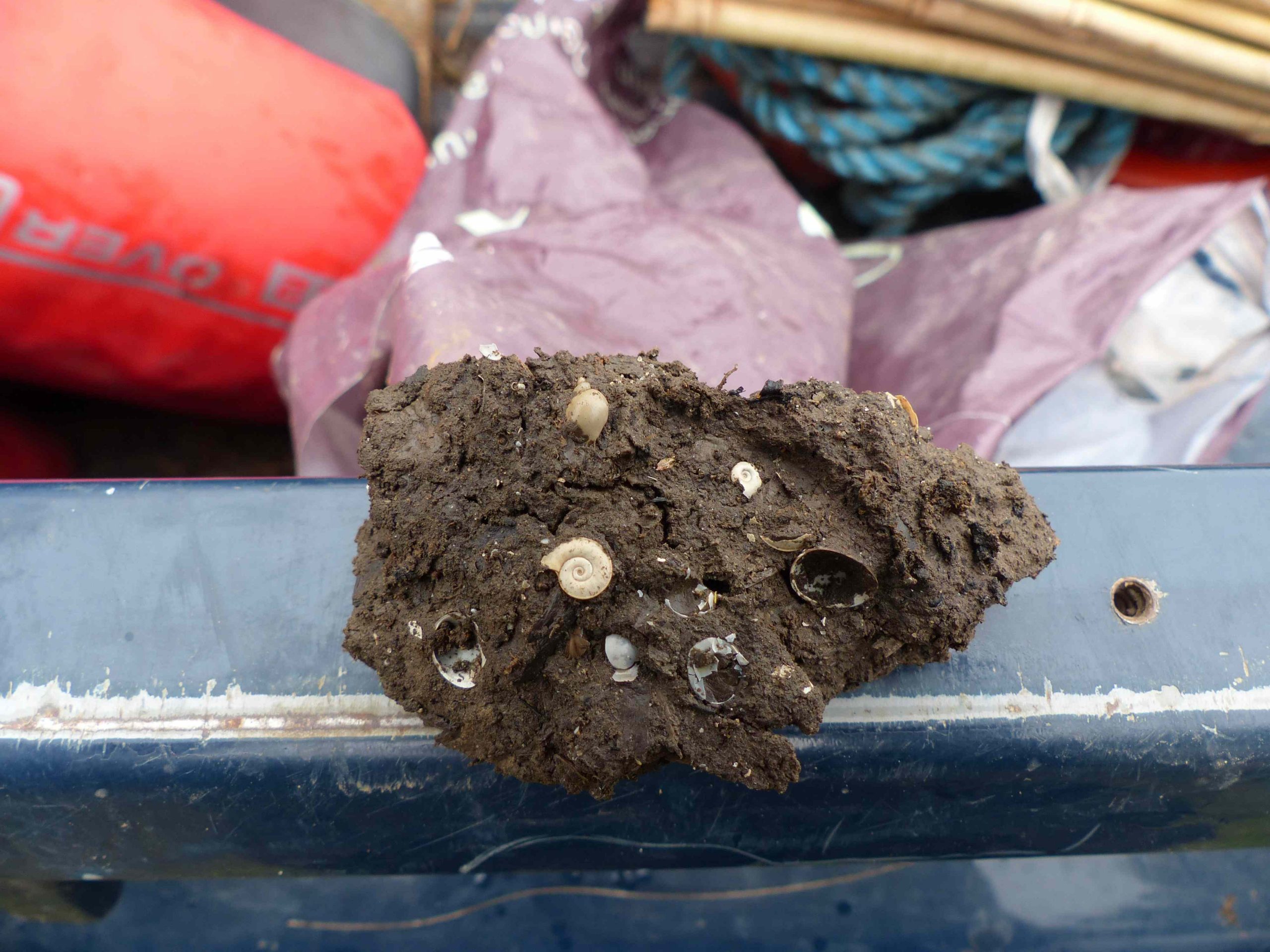 The benefits of a resurrected pond

As water starts to fill the pond excavation you can expect to see discoloured water (winter) and then algal blooms (spring), but after six months, and sometimes in less time than this, the water should start to clear and water plants will start to return. Due to the remarkable persistence and continued viability of wetland plant seeds, the colonisation of native wetland plants can be very fast. Wetland plant that were common in the countryside in the past, but exceptionally rare today, can turn up in resurrected and the exceptionally rare Grass-Poly (Sayer & Parmenter, 2020) was returned to a Norfolk pond. After a few years the ponds will be farm hotspots for wetland plants, amphibians, dragonflies, pollinators, birds and even bats. After maybe five to eight years, it might be necessary to undertake light management of scrub around resurrected ghost ponds to keep them open and in good condition, but the amount of work needed after a ghost has been brought to life is minimal. 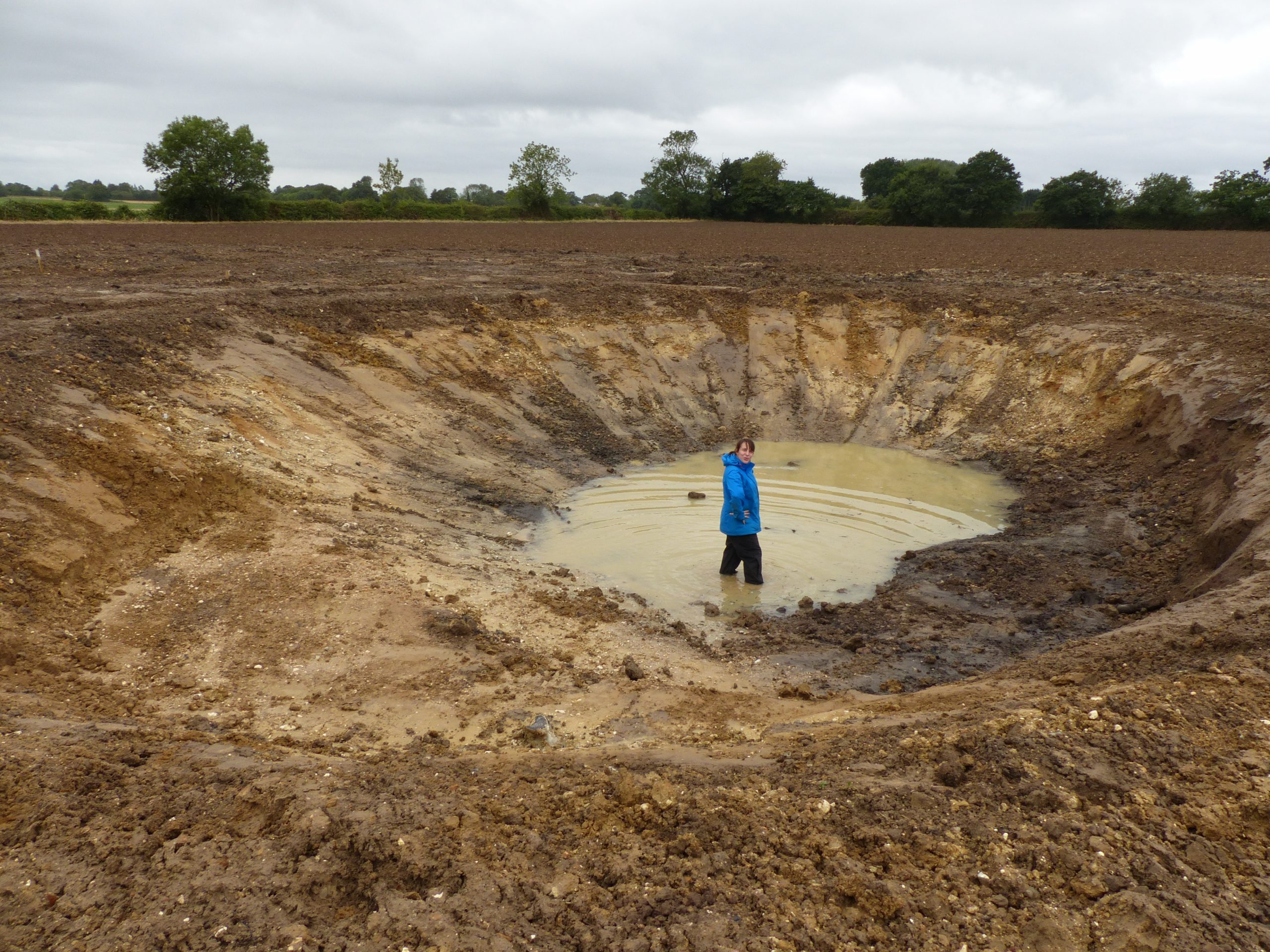 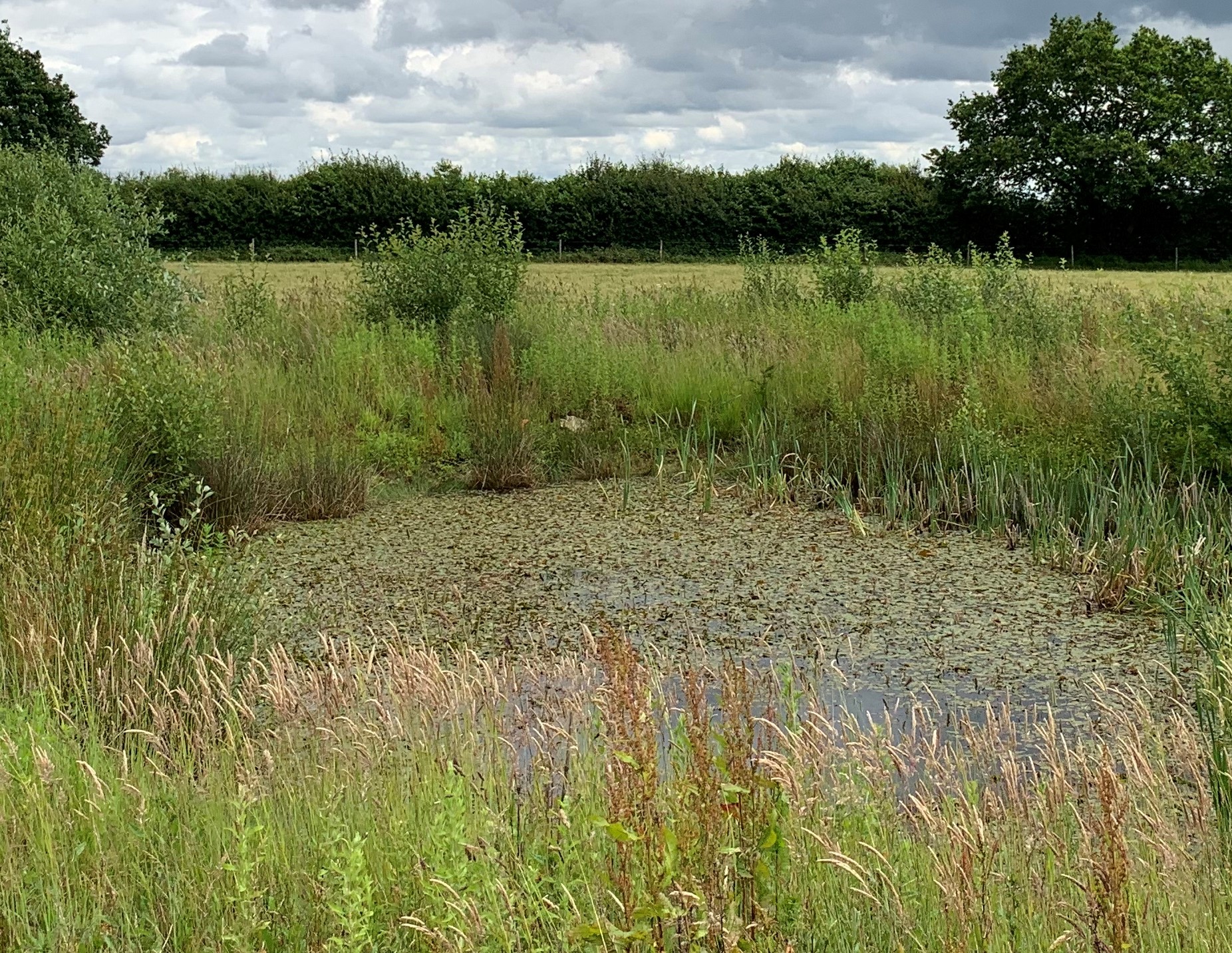 As ghost ponds generally represent sub-optimal patches of farmland due to high water-table positions and poor drainage within their footprint, excavation will have negligible impacts on crop yields. Resurrecting a ghost pond is a way of providing habitat for farm wildlife with very little loss of land. The whole process of digging out a ghost pond and watching wildlife return is inspirational for farmers, scientists and conservationists. It is hoped that future agri-environment schemes, including ELM, will embrace the resurrection of ghost ponds.

When you see a strange ethereal mist collecting in a hollow in the falling light of winter, a pond ghost may lie beneath, buried alive, but ready to spring to life.