Chalk grassland is one of the richest landscapes for wildlife in the UK and is a habitat which has suffered significant losses in past decades. This case study focuses on Manor Farm in Wiltshire, now the operational base of RSPB’s Winterbourne Downs nature reserve, which was acquired by the RSPB in 2005 with the overall objective of creating a habitat ‘stepping-stone’ for wildlife between two internationally important chalk grassland areas: Salisbury Plain and Porton Down.

To enable wildlife species to thrive on the farm and expand their range from the neighbouring chalk grassland areas, much of the arable farmland was reverted to lowland calcareous grassland, a UK priority Biodiversity Action Plan (BAP) habitat. An initial reversion of about 40ha in 2006 has been followed by further grassland creation projects at the rate of around 25ha per year, and now almost 200ha of the total farm area of 296ha has been reverted to semi-natural chalk grassland.

Agri-environmental scheme grants from Natural England and capital grants from the Heritage Lottery Fund were major contributors to the reversion works.
This case study describes in detail the reversion of a 24ha area of arable land, started in 2008.

In order to select the most conducive sites for reversion, soil samples from across the farm were analysed. It is recognised that land with low nutrient levels, particularly available phosphorous, is the most suitable for creating and restoring species-rich grassland – the best sites will have a phosphate index of between 0 and 1. The results of this showed much of the farm to have high soil phosphate levels and two fields totalling 24ha with a phosphate index of around 2 were selected.

Machine-sowing of harvested seed was chosen as the most suitable method of starting off the reversion process. Natural re-colonisation was thought to be unlikely to produce the right levels of target species, since this requires plentiful supplies of nearby seed – something which could not be guaranteed, especially over such a large area.

A mixture of brush-harvested wildflower and grass seed was sourced from four local downland sites, including the Salisbury Plain Training Area, where there are several thousand hectares of good quality calcareous grassland. Using locally sourced seed increases the chances that the plants will thrive, as they will be better adapted to the local conditions.

After harvesting the last arable crop from the selected fields, a sterile seed bed was created by spraying with glyphosate and cultivating with a spring-tine cultivator to provide a good tilth. A few weeks later, in mid-September, the wildflower/grass seed mix was sown using a pneumatic fertiliser spreader, which blows out the seed from tubes spaced 1m apart along an 18m boom width. 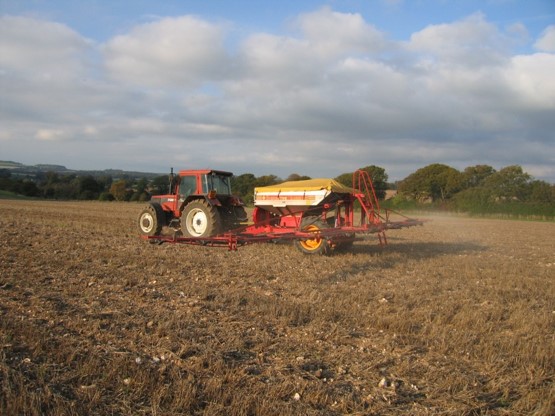 The seed was mixed with kiln-dried sand to improve the flow of seed through the spreader and sown at a rate of 20kg per hectare. Four complete passes of the spreader were made to ensure good distribution of the seed. The fields were then rolled with a Cambridge roller to ensure good contact with the soil.  The approximate cost for this (in 2008) was just under £900 per hectare, split between herbicide (17%), seed (76%), dried sand (2%) and labour and diesel (5%).

In the first year, the sites looked very patchy, although many chalk grassland species were showing by midsummer, such as salad burnet and small scabious. The fields were topped once in early May, timing the cut to catch most of the black grass and other unwanted plants such as thistles and docks before seed set. 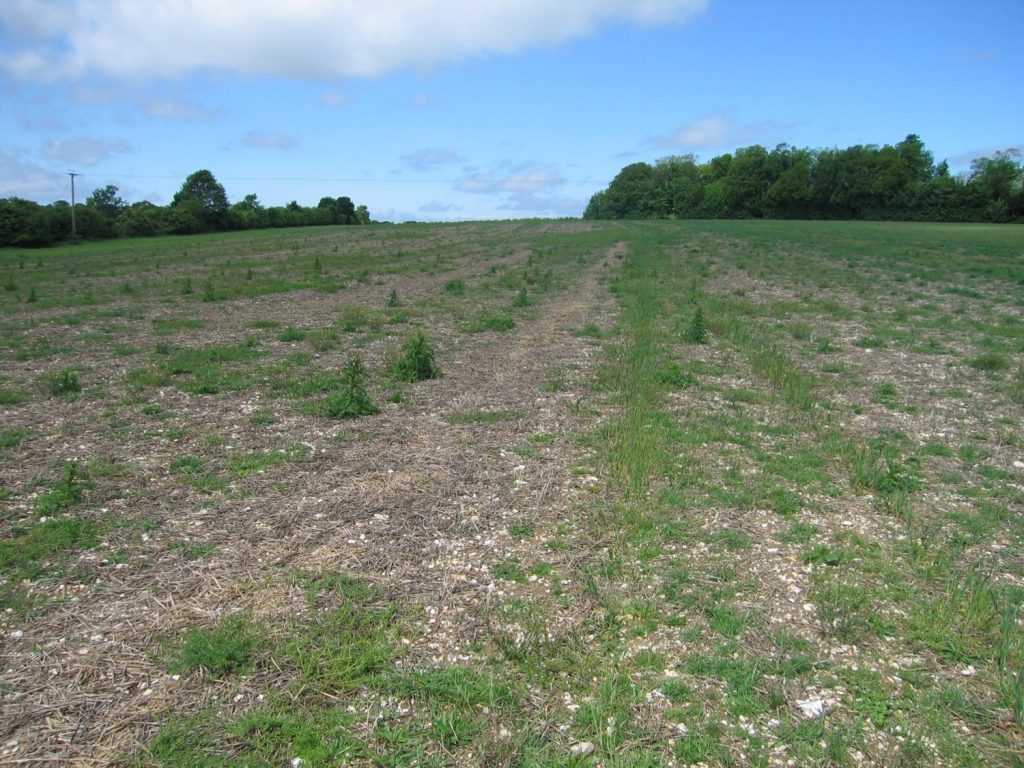 Patchy coverage in the first spring after autumn sowing

An early cut avoids topping more than 25% of the yellow rattle, which is a key species in the arable reversion process. Yellow rattle is semi-parasitic on grasses and clovers, suppressing grass growth and increasing the light available for other wildflowers to prosper.

The side shoots from the yellow rattle and the other chalk grassland species were then allowed to flower and set seed and a further cut was made in July. The arisings from this July cut were collected and removed to prevent mulching and help drive down the nutrient levels, allowing the flowering species to compete effectively with the grasses. 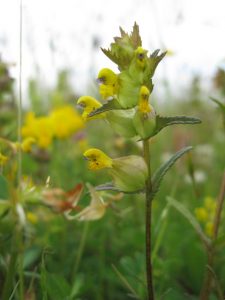 Sheep were introduced in the Autumn/Winter to create a short open sward with occasional tussocks, which created some habitat diversity in an otherwise flat field. In the following two years, hay crops were taken to further reduce soil nutrients levels, with aftermath sheep grazing from autumn to early spring. Supplementary feeding was avoided to prevent the import of nutrients.

By the third year after sowing the plant community was typical of early grassland creation, with a large diversity of species present – 37 species were recorded inside the assessment quadrats, with a further 21 species elsewhere in the sward. These included species which are characteristic of chalk grassland and typical of nutrient-poor conditions. Analysis of the species makeup showed that there were five ‘dominant’ or ‘abundant’ wildflower species: yellow rattle, ribwort plantain, black medick, self-heal and white clover. Of those recorded at lower frequencies, several were chalk indicator species, including harebell, perforate St. John’s wort and field scabious, as well as those listed in the Natural England ‘species indicators’ table below. The woodier perennials like greater knapweed, oxeye daisy and wild marjoram were establishing well. 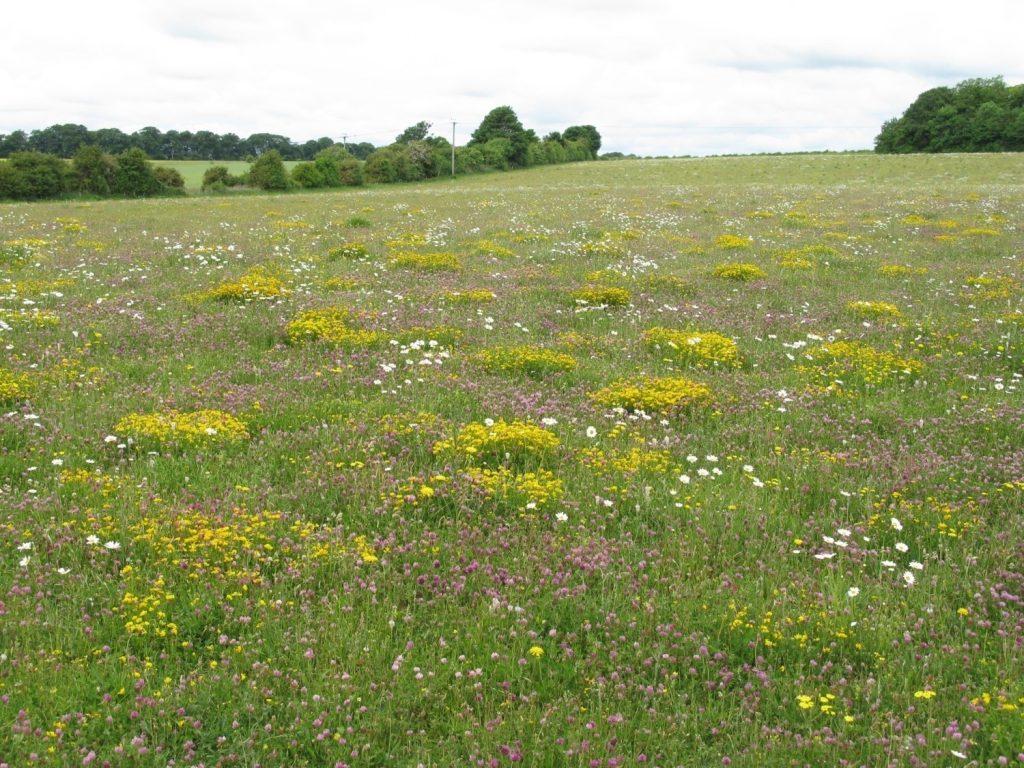 The following table shows the criteria for success set out by Natural England for this type of habitat and how the reversion fields measured up against these criteria: 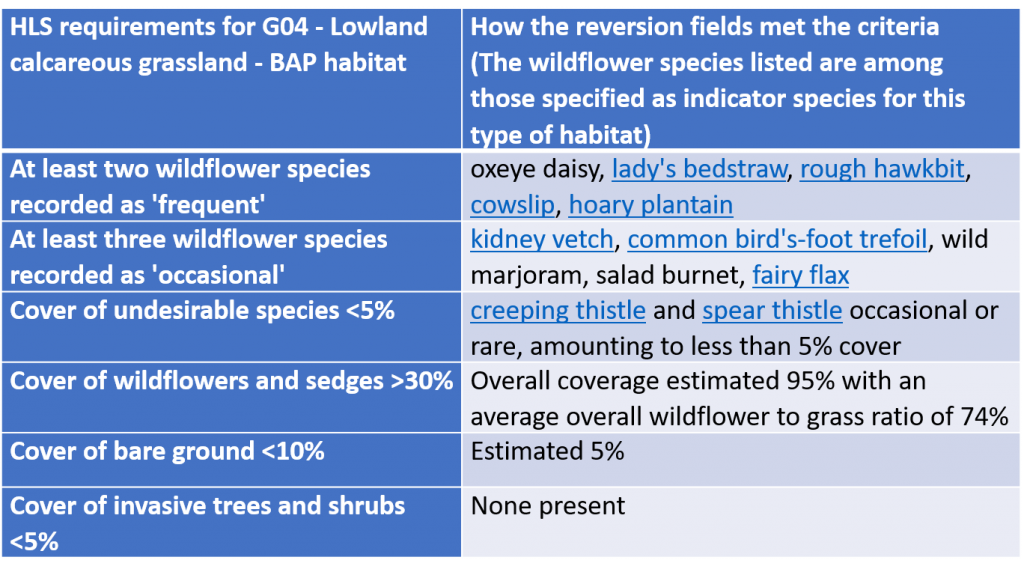 The importance of soil fungi and organic matter

We found that some species were slower to establish than others. This is likely to be due to the abundance and diversity of mycorrhizal fungi present in the soil. Intensive arable agriculture reduces this diversity, and some plant species will not be able to exist on the land until the correct fungi arrive. It wasn’t until about four years after the start of the reversion that the first signs of fungal colonisation, the ‘fairy rings’, could be seen and species such as dropwort and devil’s-bit scabious began to appear. It was more than five years after sowing before any orchids were spotted, which is likely to be an indicator of the developing populations of mycorrhizal fungi.

Some good indicator species like saw-wort, have still not been recorded, although we know the seed was sown. This could be due to the soil conditions or plant associations not yet being right for them to get established. 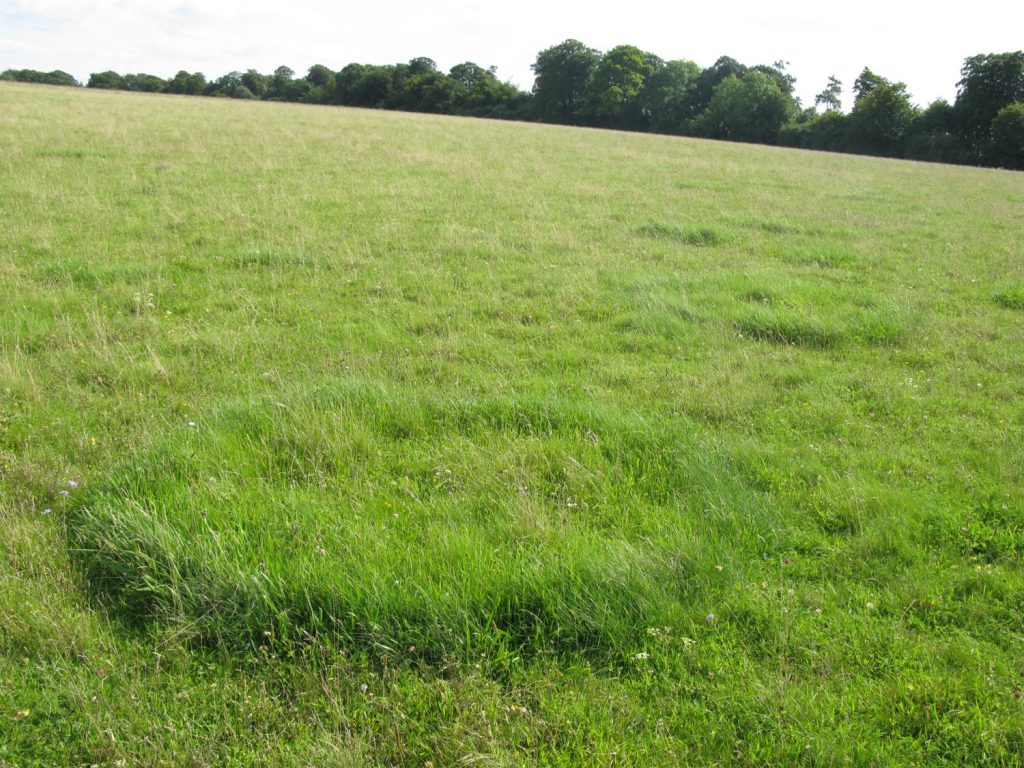 The levels of organic matter in the soil were extremely low to begin with, at around 2%, which is consistent with the land having been in long-term continuous arable cultivation. The establishment of permanent grassland will cause the organic matter levels to increase over time, especially where the land is grazed. The soil analysis results for 2017 showed that the levels in the early reversions had generally gone up to around 5-9%. The increase in soil organic matter goes hand in hand with bacterial and fungal diversity and with the locking up of carbon, making semi-natural grasslands like chalk grasslands in our landscapes a natural way of helping to tackle climate change.

We saw an amazing transformation from cultivated land to herb-rich sward by year three, and even by the second summer after sowing there was visibly and audibly more insect life in the new grasslands. The most obvious insects are of course the butterflies, and from the second year we saw meadow brown, common blue, small blue, dark green fritillary , marbled white, ringlet and small skipper.

Other insects, such as moths, beetles, bees and flies had also colonised the grasslands, although no formal assessment was made in the early years to compare with the baseline survey taken at the start of the reversion process. However, in an invertebrate survey undertaken in 2016, one new BAP Priority species (the bumblebee Bombus ruderatus) and eight new Nationally Scarce species were recorded, including the six-belted clearwing moth and the picture-winged fly Merzomyia westermanni.

When farmland is taken out of cultivation there is a risk that some bird species associated with arable cropping might decline, so it was important to ensure that the key requirements of these species were maintained. To help ensure seed food availability for farmland birds on the farm, some strips of wild bird seed mixes were sown alongside natural features such as hedges. Farmland birds are regularly seen in the floriferous arable margins and the bird seed plots, and whilst the figures from the Common Bird Census recording took a little while to show real signs of benefit, the ongoing provision of suitable habitat has reaped rewards. Local populations of farmland birds such as skylark, yellowhammer, linnet, lapwing and corn bunting, all of which are currently species on the Red List of Conservation Concern, have either increased or been maintained, as the chart below shows. 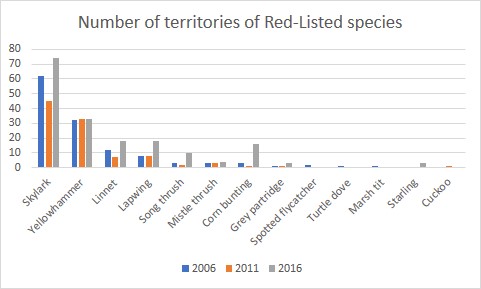 We have learnt a couple of important technical lessons regarding nutrient levels and seed sowing as a result of our reversion projects.