High Burnham is a large (+300ha) arable farm.  As part of the RSPB’s Axholme and Idle Farmland Bird Initiative¹ (Lincolnshire), an opportunity was identified to revert an arable field corner to a species-rich meadow.  The 1.7ha field corner sits within the base of a large L-shaped arable field.  Because of the clay-based soil type, the field corner lay wet so was deemed unsuitable for arable cropping hence it was left out of production for four years.

The low-lying field corner lends itself to a pastoral management and is less than 200m from Rush Furlong Meadow SSSI.

This will be the only parcel on the holding managed as grassland.  It is anticipated that hay will be cut by a local contractor used by the Lincs Wildlife Trust and aftermath grazing will be carried out by a local grazier.

Verbal advice and a written proposal were provided to the landowners on species-rich grassland establishment and management.  The RSPB’s Hay Meadow and Arable Reversion topic sheets were used to supplement this verbal and written advice.  The landowners understood the principles of grassland management through knowledge of a local grassland SSSI.

Hay strewing is a tried-and-tested method for enhancing the botanical diversity of species-poor grassland² and can also be used to create diverse grasslands on arable land³.  It entails taking freshly cut ‘green hay’ from a local donor site and, on the same day, strewing (spreading) it onto a suitable receptor site.  It is a cost-effective method and ensures that the received seeds are of local provenance. 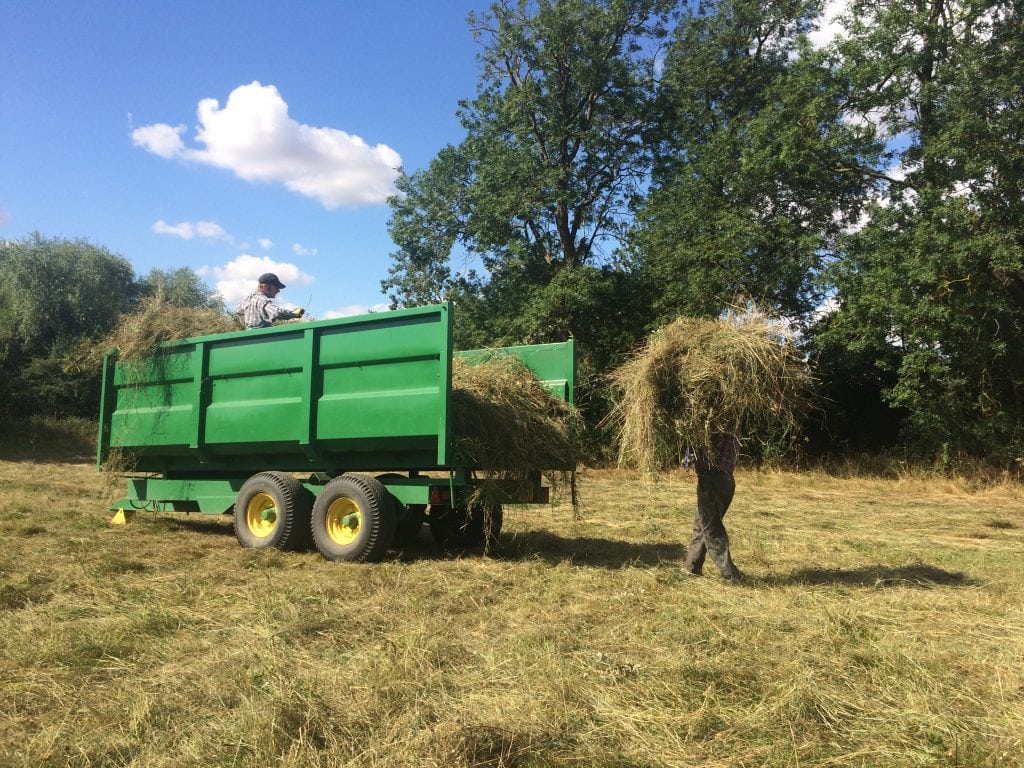 Technical advice was followed to ensure the receptor site’s soil was suitable, through testing phosphorus (P) levels.  The soil sample results showed a P Index of 1 (low) so was deemed acceptable.  The farmer prepared the site by spraying off weeds using herbicide and creating a create a fine, firm and level seedbed, avoiding looseness at depth.

The site has no historical significance.

Because the donor site is an NVC MG4 vegetation community, containing abundant great burnet, we followed advice from a floodplain grazing meadow conference (attended by Helen Norford of Yorkshire Wildlife Trust) to spread the hay at reasonable depth (up to 10cm).

Once strewn, in the first year the vegetation growth should be cut up to 4 times and then the grassland should be treated as a traditional hay meadow thereafter.

Because the donor site was smaller than the receptor site (0.9 and 1.7ha respectively) we found that we had a deficit of green hay for the receptor field and a ratio of 1:1 (as recommended by Dr Duncan Westbury) would have worked better.  Partners therefore plan to revisit, survey and repeat if necessary next year.

Black grass growth will also be re-sprayed off this year.

The cost of the green hay was free as it was donated by Lincolnshire Wildlife Trust.

There was a minimal fuel and labour cost incurred by the farmer transporting the two loads of green hay from the donor site to the receptor site.

Breeding skylarks have been recorded in adjacent fields during RSPB bird surveys and breeding skylarks are also recorded at Rush Furlong SSSI so the parcels should attract skylarks.  The parcel also offers potential lapwing nesting habitat, providing the additional scrape excavation works are undertaken. There are records of yellowhammers in the hedges and reed buntings nesting in the adjacent OSR crop.

Don’t be tempted to miss out the soil testing step! If phosphorous index is anything above low, species-rich grassland creation may not be viable for your site at this moment in time.

Ground preparation is really important and if strewing onto established grassland, really open up the sward so that lots of bare ground is showing.

Orchids may take several years before they appear so don’t be disheartened if nothing happens for the first few years.

Expect to have to consider repeating the method to ensure a diverse sward.